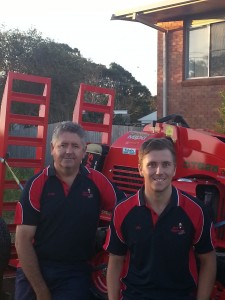 When the metal fabricating company that Port Macquarie father and son Craig and Jay Worth both worked for shut its doors a few months ago, the pair could have wallowed in the depths of despair and joined the unemployment queues.

Instead the positive-thinking duo decided to invest in their own future by buying their own franchise business and after researching all the possibilities, they decided on being the first NSW franchisees for Jim’s Diggers.

When news of the company closing its doors hit, and knowing that job opportunities in the local area would be limited for both himself and Jay, Craig and Jay decided to take matters into their own hands, and look at the situation as a new beginning.

“For the last eight years I had pretty much been stuck behind a desk, which is not what I prefer to do, so I am happy now to be working for myself, working outside, driving the machines – I see it all as a positive,” Craig said.

Part of Craig and Jay’s business’ plan is to give back to the community, and raise funds and awareness for men’s health charities.

“We are currently growing moustaches to support Movember, and we also plan to raise money for Beyond Blue. Men’s health and depression are very big local issues particularly with lots of unemployment around. It’s like it affects every second person and we have had an issue in our own family so I understand what a lot of people are going through,” Craig said.

They will be at the Laurieton Riverwalk Markets on November 17 to show off their brand new Jim’s Diggers vehicles and machines including the ‘Kanga 8 Series’ Digger which they plan to use to dig, clear and excavate sites for both commercial and domestic customers all over the Port Macquarie area. Craig and Jay will also be collecting donations for their charities and encourage the public to come up and say hello and find out more about their services.