In combined efforts with the very generous earthmoving industry, Kanga Loaders together with Digga Australia, were able to raise $87,900 in donations to support the Ovarian Cancer Research Foundation this year.

The Ovarian Cancer Research Foundation was chosen as a partner charity, a foundation dedicated to developing and implementing an early detection program and improving the mortality rate, management and long-term survival of women with ovarian cancer. As the company suffered a big loss in June 2018, when Suzie Wright, CEO and Managing Director of Kanga Loaders, passed away after a long struggle with a rare form of ovarian cancer, this is a very close cause to our hearts.

The Diesel Dirt and Turf Annual Charity Golf Day was held on the 15th of March this year, where Kanga Loaders participated as a golf team but also presented their first charity auction loader, in the colour of the chosen foundation. More than 130 golfers teed off at the event and $32,500 were raised on the day, which was then matched by the very generous family of Suzie Wright, allowing donations to be raised to $65,000. 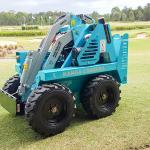 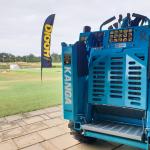 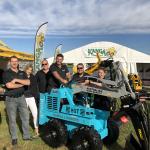 The presented loader at the Golf Day, was then auctioned off on the 4th of May 2019 by Pickles Auctions at the National Diesel Dirt and Turf Expo, Australia’s Largest Construction Industry Expo.

But we’re not done yet! Another charity loader is now being auctioned off online at www.givergy.com.au/kanga, which will also be presented on the 23rd of May at the Hire 19 conference, the final day of the auction.

Want to take part in the auction? Click the button below!