Roger Dowsett also known as the Digger Man recently purchased a new Kanga mini 6 series. Infact, he drove it off the stand at Elmore Field Days!

The Digger man operates within a 150km radius of his base in Katamatite. He told Kanga, he rides the highs and lows of a new business. Roger hasn’t always been in landscaping and maintenance. He took a step of faith 3 years ago when he was made redundant from his position as Regional Operations Manager at the Salvation Army.

Despite having little experience in this line of work Roger is happy to be out from behind the desk and getting stuck into it. He set up his business doing what he enjoys – being outdoors, landscaping, ground maintenance and being an all round handy man.

The Digger man upgrades to the kanga 6 series

To get help with his day to day activities Roger uses a Kanga mini loader. The entire range of Kanga mini loaders are designed to make light work of the hard work and suitable for a multitude of applications.

Roger purchased his first Kanga in June 2014 and he explained, “My first Kanga was a second hand 5 series and lasted me well. I purchased my new one from Declan on the 5th October 2017. It’s a 6 series and I actually drove it off the stand at Elmore Field Days!”

Still keen on his old 5 series model Roger explained when he came to choosing a new model he did look at other brands; he even tested and demo’d a couple to be sure but as soon as he tried the 6 series it was a winner:

“I was looking for a new model but it had to keep key features which I loved from my old 5 series: Australian made, well-constructed, good power, decent ground clearance, reliable with a good customer service support team and a wide range of attachments so I can expand.”

“I would highly recommend a Kanga to anyone”

Roger is now working on projects he would not have tried before, explaining to us that he always looks forward to work and “having a crack” on his new machine.
“The kanga is beautifully balanced, the controls are soft and it is well built and looks the goods. The Kanga mini loader has added real value to our business and we would be lost without it.”
Completing a variety of works from general bucket loading and lifting, gravelling driveways, trenching and installing many post holes for new fences, Roger really digs the versatility of the machine and extremely pleased with the service he has received throughout the purchased process.

The machine is so versatile, I can get into places that a larger skid steer can’t which gives us a huge advantage in homes and gardens.
It is easy to operate and not tiresome on the body as it’s a smooth machine and I truly can’t speak highly enough of it.
We received amazing service from Declan, the price was competitive and as I stated above, the whole process has exceeded my expectations. I would highly recommend a Kanga to anyone.” 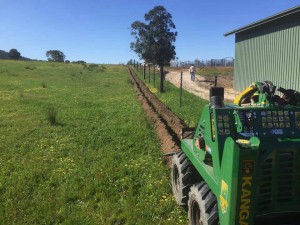